When the owner of Greenville’s Stax’s Original, Nick Stathakis, is home he has some unusual pastimes; Nick builds goat fences and other structures on his farm. A year ago, he flipped his UTV going up a steep hilly grade on the four-and-a-half acre property. He laughs about it now. After all, mistakes are bound to happen when you’re adapting to a way of life.

Whether he’s showing his twelve-year-old son how to pound T-posts or sending all three kids on a hunt for garden stepping stones, there is always something to do, grow, clear, pick, or feed in the Stathakis backyard, and that’s exactly how Nick and his wife, Gretchen, want it. 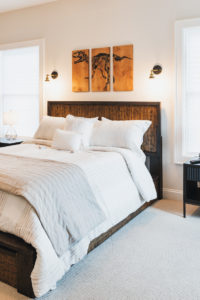 The Stathakis family had lived in a large custom home in the gated Montebello community, but the house cost a lot to maintain and Gretchen started to notice some drawbacks. “We saw that our kids were starting to become ‘city kids’ they didn’t want to go outside or get dirty.”

Gretchen recalls jogging down a winding road past a wooded overgrown lot. Even before it went on the market, she met the owner and asked if she could walk around the property. As she trudged through a dense menagerie of weeds, mid-century ruins and tangled scrub trees, she couldn’t believe this untamed world was only two-minutes from the manicured lots of their neighborhood. The place recalled simpler times and the unkempt nature of the foothills in the Upcountry.

When Gretchen was a child, the only rule was to be back for supper. “My Dad would come home when the sun went down, we’d watch his work truck pull up and that’s how we knew it was time to come in.” She and Nick realized a unique opportunity to give their kids the type of free-range upbringing they’d both enjoyed, playing outside all day, getting lost in games of imagination. “The whole purpose of moving out here was, outside is your new playroom,” Gretchen says.

They purchased the property with no plans to subdivide it. The couple walked the land, creating sketches of what their home should have and where it could sit. Nick focused on a theme of “everything you need, nothing you don’t.” And, what the Stathakis family needed was simple: straight pitches, muted earth tones, lots of symmetry, organized in tidiness of a T shape. 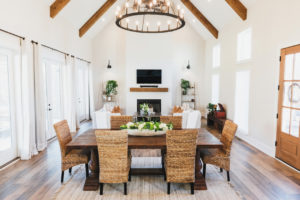 They hired Sam Justice, of Justice Design Studio, to do the architectural rendering and Jeremiah Johnson, of Silverline, Inc., was also helpful in the initial design process. The goal was to take Gretchen’s inspiration of a post and beam house, a modern farmhouse aesthetic, and an airy barn-dominium and turn them into something that could be built efficiently and on budget.

They selected Rick Thoennes of Rembrey Custom Homes to do the construction, a bit of a surprise move as Thoennes is known for building luxury homes, such as those in Montebello and around Greenville that are similar in scope to the one the Stathakis family had just sold. Nick told Thoennes, “The accouterments you are used to putting in are not going to be here. Do you want to do it?” Thoennes said he did, and Gretchen and Nick say their 9-month build process hummed along and Thoennes came through with both their design needs and budget.

The finished product is a 2,780 square-foot, 4-bedroom, 3.5 bath home that feels much bigger because of its 21-foot vaulted ceilings and open floor plan. The exterior siding is cement on an aged brick foundation. The front entrance of the house leads into a great room with an open kitchen on the left and living space on the right. “We got rid of the formal dining room because we wanted everyone together eating,” Gretchen says. 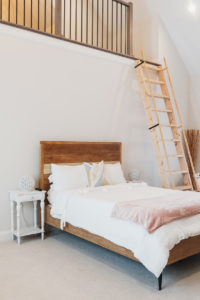 A set of French doors opens to a large back porch for true indoor/outdoor dining and flow. The kitchen has natural white quartz countertops and minimal wood shelving instead of cabinetry; fresh eggs from their hens, and produce harvested from their garden, sit in a small dish by the kitchen window. Behind the kitchen is an oversized mudroom with an attached laundry room. It has built-in storage for all of the kids’ bags, coats, and shoes.

Nick and Gretchen’s bedroom is on the main level and though it is on the smaller side compared to current custom build standards, it packs some creative punches into its right-sized layout. Instead of bumping the wall out for a walk-in closet, Gretchen decided to have a floating natural rock wall behind the bed. It was installed by Rusty Starr and B&L Distributing Company. The rough rock was selected from Cherokee antique stones with shades of gray-green, mountain smoke, steel and rusty brown; it reminds Gretchen of her great-grandparent’s Cherokee heritage. Behind the rock, there is extra storage space and a set of very special doors opening to a shared his-and-hers closet, which suits the couple just fine. “I don’t have high heels in the closet, I have tennis shoes and dirty boots,” Gretchen says.

The closet doors are a piece of family history. Walter Stevens, Gretchen’s father, used to play in an old barn in Walhalla when he was a kid. One day, he called to say that the barn was getting torn down. Gretchen, her dad, Nick, and a woodworker friend named Josh Bagwell drove out and got the barn wood. Bagwell fashioned doors from it. They were hanging in their old house when it went on the market, but Nick and Gretchen forgot to put that the doors wouldn’t convey with the house. 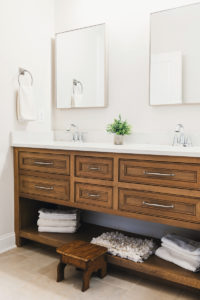 “We lost a sale over these doors,” she says and the couple aptly commissioned replica doors to be made for the eventual buyer. The main bedroom also has an en-suite bathroom with a dual shower and a double sink. It is well-designed for convenience and efficiency.

Their children, Frankie, Theo and Brooklyn, each have their own carpeted space upstairs. Oak stair treads were selected to match the LVT flooring from Greer Flooring Center that covers the home’s common areas. The couple chose waterproof vinyl planks that look and feel like wood for the added durability. “It can live up to three kids and if a random goat walks through, I don’t have to worry about it,” Gretchen says. Frankie’s room has a window that overlooks a cluster of shade trees the family calls the “bird sanctuary;” several birdhouses and feeders hang from the lower branches. The area was left untouched on purpose when they cleared the land themselves by hand.

Frankie shares an L-shaped jack-and-jack bathroom with his younger brother. Theo’s room is over the kitchen and has excellent sunset views from the front and the goat pen and chicken roost out the back. Even in the upstairs bedrooms, the outside always beckons. The lone daughter, Brooklyn, has her own “princess room” complete with a finished ladder loft space over the attic storage area. It gives her a hangout spot for friends who come over for slumber parties. “This is the one thing we did that cost extra money, but it was wasted space and now it’s a feature,” says Nick.

While the house is modern in its comfortable convenience and inviting, its higher purpose is to be a portal to the main attraction, the urban farm and great outdoors. Nick and Gretchen named their farm “Sticks and Twine” after a line from the award-winning film the couple executive produced in 2017. Most of the family-themed sci-fi film was shot in Greenville. It was released nationwide and won seven best feature film awards at indie festivals. 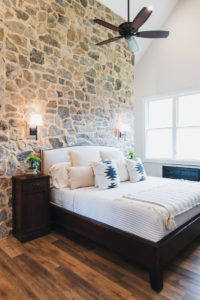 The lot has its own movie-esque backstory. In the 1950s, the property was the shared bottom half of three estates owned by the Greenville families the McClains, the Furmans and the Yeagers. Buried under three inches of earth the Stathakis’ uncovered stone pathways that used to lead to a shared pool, circular courtyard and changing rooms. The concrete shell of the old pool conducts heat and found its second act as the foundation for a new greenhouse. Contractors on the project helped assemble the greenhouse’s A-frame. “It was pure imagination,” says Nick who figured out a watering system for the structure.

Today, Gretchen manages what’s growing; banana trees, lavender, aloe plants, basil for fresh pesto, celery, cucumbers, brussel sprouts and tomatoes are harvested for family use, but any extra can end up at the restaurant, “There are too many tomatoes to eat, so they go in the grilled chicken salads,” Nick says. Behind the greenhouse, among the tall trees, is the place where the kids can run wild. Tepees, hammocks and forts provide the makeshift spaces for nature’s classroom. “There’s a switch in every child that is there inside of them and you put a kid out on a creek with some land and this new level of imagination just happens. A stick will entertain them for hours,”Nick says. “We come out and have Nerf gun wars,” says Gretchen. This area also provides a food source and sanctuary for the wild turkeys who roam the mountainside. Wendy Watson of Wild Rehab of Greenville also released two groundhogs on the property. The Stathakis family has come a long way in a short distance in the last two years. Gretchen says, “It’s 180 seconds from here to the gates of Montebello, but you feel like you’re far from it.” 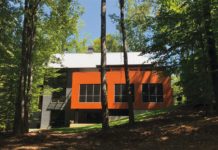 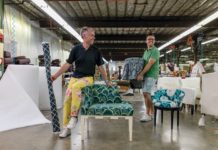